German excavator manufacturer Atlas has a long-held reputation for providing reliable and well-built excavators and material handlers for its customers across the globe.

Whilst many will recognise the orange and grey equipment in scrap yards, they have also been manufacturing a range of crawler and wheeled excavators at their Ganderkesee plant for over 100 years.

One area the company is particularly dominant in is that of waterway maintenance, not only in Europe, but also in the UK where a number of Independent Drainage Boards (IDB) and private enterprises have been running Atlas crawler and wheeled machines for river and watercourse maintenance and management.

One of the manufacturer’s recent innovations is Bigfoot. No, not the mythical Canadian ape like creature, but a converted 140W wheeled excavator that has been tweaked to provide users with a lightweight, highly mobile excavator capable of undertaking drainage and land maintenance works as competently as any crawler machine. 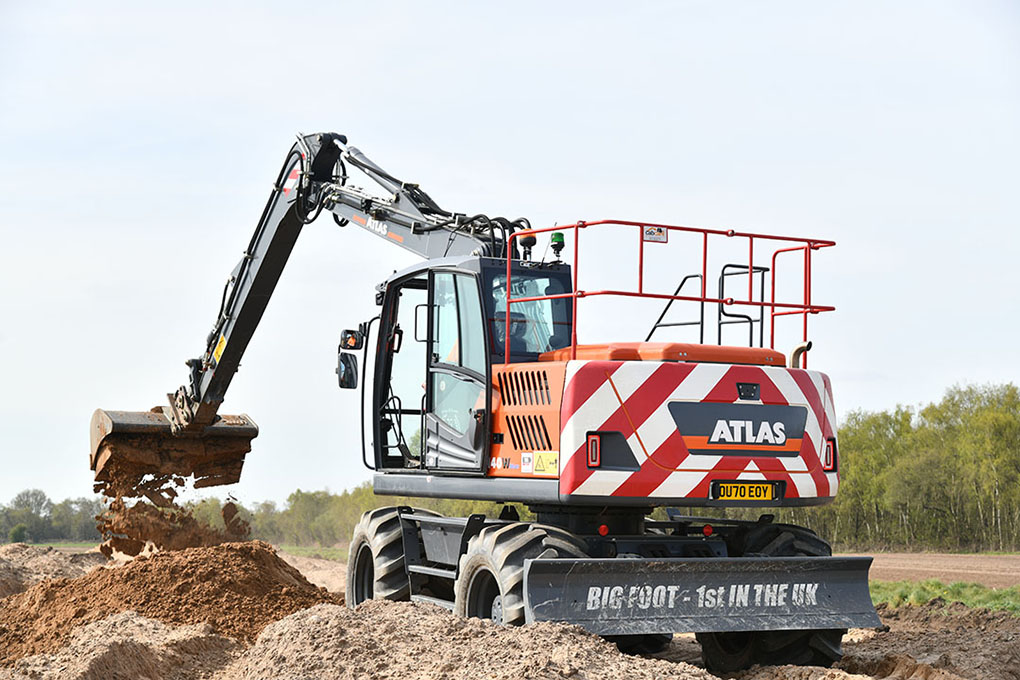 The 140W mobile excavator, as a standard machine is a more than a capable performer. But after Atlas engineers have added their tweaks, the 15-tonne duck is transformed into a multi-purpose performer capable of undertaking a range of standard and long reach work according to its owners.

The UK market for such machines is small, despite the miles of waterways requiring maintenance. Gaz Bourne, Regional Sales Manager for Atlas’s UK dealer TDL Equipment explains; “Whilst we have hundreds of miles of inland waterways in the UK, there is only a short period of time that many can be worked on due to environmental concerns. This means that the machinery employed to do the work has a short working window and ultimately doesn’t accrue the hours a standard machine would in a working year. Many of the IDBs keep their kit for between five and 10 years with the downtime between projects being used to maintain the machines and keep them in immaculate condition.”

One private company who manages to keep their machinery in top notch condition and work them for up to 2000 hours a year is Nottinghamshire based DC & R Bichan Excavations and Ditching Contractors run by father and son team Dave and Richard Bichan.

A long-standing Atlas user, Dave purchased his first Atlas back in 1995 and hasn’t looked back since. “I started out in farming with my father well before the drainage work started.” Dave explains “Our contracting work led us into undertaking some drainage work and it all sort of stems from that point! I ended up purchasing a used Atlas off the local drainage board who we undertook some work for. It was a few years old but still in excellent working condition which is testament to both the product and the maintenance regime that the IDBs undertake with their kit.”

Whilst previously undertaking work in conjunction with local authorities, landowners and drainage consortiums, Dave now works almost solely on a private basis for landowners and developers which he finds more rewarding and continuous.

We caught up with Dave and Richard on one of their jobs on the outskirts of Doncaster where they have been constructing a large pond as part of an expansion project at Lindholme Lakes Country Park Limited.

Both the new Bigfoot 140W and their older 140W were on the job and when parked together and the difference is striking. The Bigfoot is considerably taller than the ‘traditional’ 140W drainage rig. Whilst the older machine sits on wide axles and a set of 600/40-22.5 tyres, the new machine has 710/45-26.5 carrying its weight. To cater for the larger tyre, Atlas engineers have replaced the standard slew ring with a version 150mm taller meaning the combination of tyre and slew ring add almost 200mm to the height of the machine. Unlike the standard machine which has undercarriage and dozer blade options, Bigfoot comes as standard with just a parallel dozer blade at the rear. 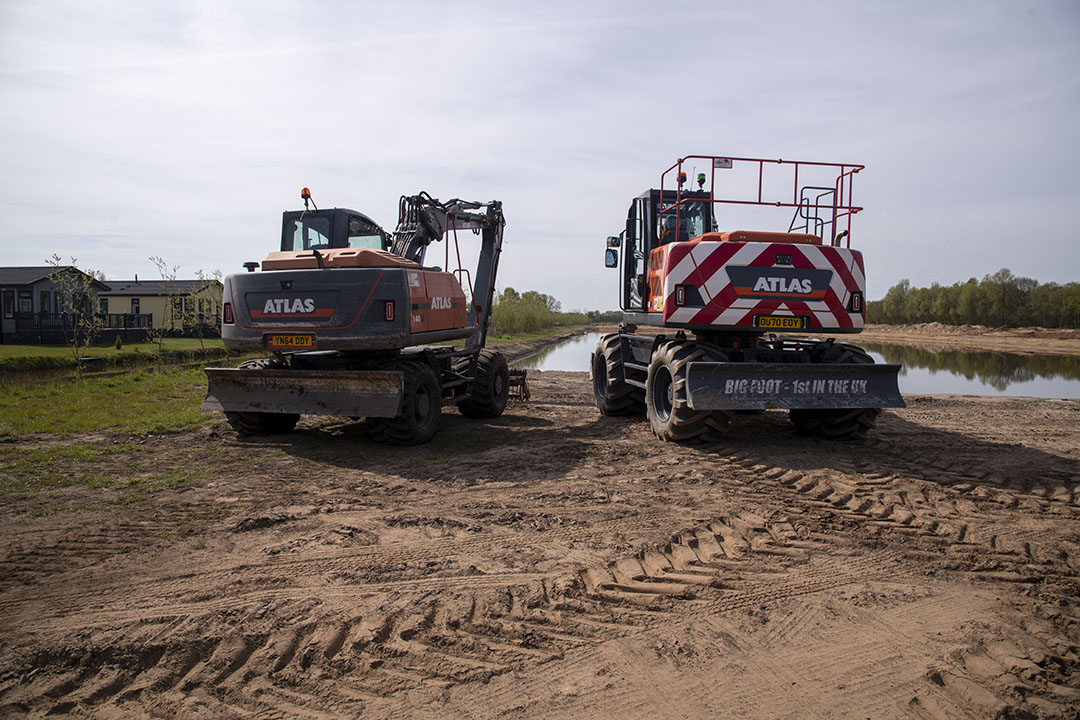 Richard is the regular operator of Bigfoot and was amazed at ability of the new machine. “The older 140W is a capable machine but you had to be careful where you take it.” He commented “It is good on soft ground, but the Bigfoot is something else! The older machine would get bogged down by the axles and once suction started, you were on to a loser straight away. The new machine is simply higher off the ground, so you don’t get that issue. What has really impressed me too is the traction you get from the bigger tyres. The job here is on some very soft, fine sand and the Bigfoot seems to just float over it.” One thing that worried both Dave and Richard about the large tyres was their stability on the road. “We can do 10-15 miles a day travelling between job sites.” Dave points out “It doesn’t sound a lot, but our miles are down tight country lanes which can be quite uneven. The first time we took it out we knew we wouldn’t have any issues as it seems even better than the older machine for stability.”

Under the bonnet, the Bigfoot has also had a tweak in power from the 4.1 litre, 4-cylinder Deutz diesel which is now rated at 130hp, up from the standard machine’s 121hp. Despite the increase in upper structure height the large panels are still accessible to allow routine checks of the cooling pack and pumps to be carried out. Access to the engine requires a little climb up onto the top of the upper structure but once there, the low-profile engine cover allows pretty good access to the top of the Deutz power plant.

Access to the cab is a little more of a climb but thanks to the wide, non-slip streps and well-placed grab handles, you don’t require mountain climbing gear! Once settled in the cab, the view from the seat is excellent thanks to that extra bit of height. Both Dave and Richard are impressed with this as they say it makes it easier to see into ditches as they are cleaning them out. Both the fit and finish of the Atlas cab is first class with everything screwed together well and finished to a high standard with all the usual bells and whistles.

The long reach equipment on Bigfoot is the same as they have on the older 140W. A two-piece boom consisting of 1.95m base and 3.575m boom carry a long, 3.55m dipper. Usually, Richard carries a direct mounted bucket or weed basket but has recently added a quick hitch for a particular project as they were swapping attachments on a regular basis. This boom and dipper configuration effectively gives the Bigfoot a near 10m reach at ground level and potential dig depth of almost 6m, ideal for almost all of the drainage channels they encounter. What has really impressed the pair is the standard digging ability of the machine. “We can use the bigfoot on standard work if we need to as the addition of the long front hasn’t hampered any of its ability to dig.” Richard pointed out.

The final part of the project at Lindholme Lakes Country Park was to landscape the soft sand that had been excavated from the pond. The material had been left to dry over the past couple of weeks and without any hesitation, Richard charged straight onto the soft material steering the Atlas through the sand without any issues. The stability of the excavator even on the soft sand was very impressive to watch as Richard quickly moved the material around. Even at full stretch and with a full bucket there was very little in the way of movement and when the machine moved, the marks left in the sand were no worse than I was leaving with a size 11 boot! 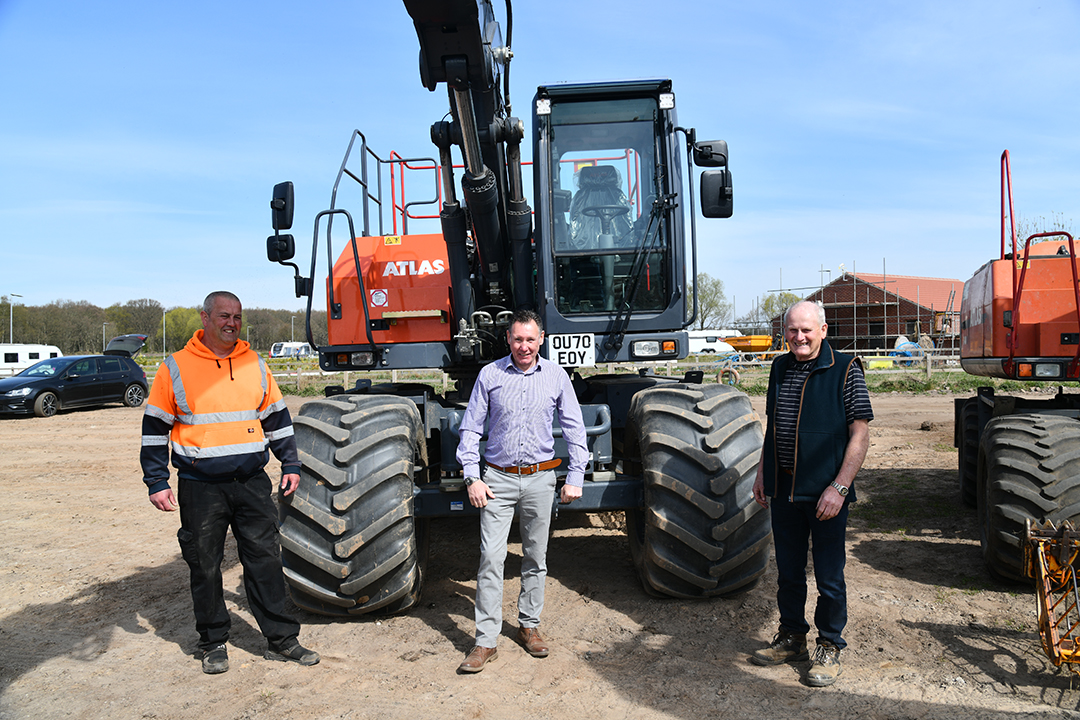 Overall, the father and son team are very happy with the new 140W. “We have been very happy with both the build quality and reliability of the Atlas products over the years.” Dave explains “We have had a couple niggling issues with things however TDL soon sorted them out. I can’t fault their desire to back the machines and their customers up.”

By Laura Fuller|2021-06-01T11:42:09+00:00June 1st, 2021|Atlas, News|Comments Off on Atlas BIGFOOT Excavator Spotted In It’s Natural Habitat
Page load link
We use cookies on our website to give you the most relevant experience by remembering your preferences and repeat visits. By clicking “Accept All”, you consent to the use of ALL the cookies. However, you may visit "Cookie Settings" to provide a controlled consent.
Cookie SettingsAccept All
Manage consent